Today in the United States is National Siblings Day; in Novara, five hundred seventeen years ago, Swiss forces captured Ludovico Sforza, who was active in fifteenth and sixteenth century Italian wars, and handed him over to the French; four hundred thirty-four years before the here-and-now, a baby boy kicked into the world on his way to becoming the famed Dutch legal thinker and philosopher,

Hugo Grotius; twenty-three years later, in 1606, King James signed off on the formation of the Virginia Company of London to move forward British efforts to colonize North America; a century and four years after that, in 1710, the Statute of Anne took effect and formally and fully inaugurated printed content as property; twenty-six decades and two years prior to the present moment, a baby boy was born who became Samuel Hahnemann, founder of homeopathy;  two centuries and one year back,  the U.S. government formed the controversial Second Bank of the United States; five years henceforth, in 1821, five thousand miles away in Constantinople, Ottoman authorities hung orthodox prelate Gregory V and threw his body in the Bosporus; thirteen years closer to now, in 1834, New Orleans firefighters uncovered the ghastly sadistic misdeeds of local socialite Delphine LaLaurie, after a fire set by her slave cook; one hundred seventy years before today’s sunrise, a male child uttered its first cry in Hungary en route to a life as the U.S. publisher Joseph Pulitzer; a hundred and fifty-three years before the present pass, testing the Monroe Doctrine, Hapsburg emperor Maximilian proclaimed himself France’s emperor of Mexico for a brief time; two years afterward, in 1866, the ASPCA was founded for the sake of a humane treatment for animals;  two years subsequently, in 1868, across the Atlantic and halfway through the Mediterranean, British and Indian forces crushed an Ethiopian army at Arogee in expanding British sway into the Horn of Africa; a dozen years hence back on the Western Hemisphere side of the Atlantic, in 1880, a baby girl gave its first cry on her way to a life as reformer and labor advocate Frances Perkins; seven years beyond that conjunction, in 1887, Pope Leo XIII agreed to the creation of the Catholic University of the United States; sixteen years later, in 1903, Clare Turlay Newberry, children’s author noted for her drawings of cats, is born; a hundred thirteen years before this moment, British mystical thinker Aleister Crowley completed his 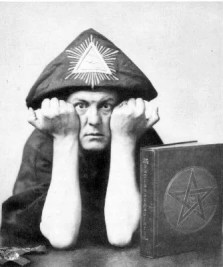 final installment of The Book of the Law; half-a-decade closer to this point, in 1909, fellow aristocrat and writer Algernon Charles Swinburne breathed his last; just three hundred sixty-five days later, in 1910, over the Atlantic, a male infant entered the world who would become the renowned Marxist thinker and founder of the Monthly Review, Paul Sweezy; two years thereafter, in 1912, the Titanic embarked on its only voyage;seven years still more proximate to today, in 1919, a plot of wealthy Mexicans and foreign business interests resulted in the gunning down of Mexican popular leader and legend, Emiliano Zapata; six years afterward, in 1925, F. Scott Fitzgerald first published The Great Gatsby; another half decade more proximate to today, in 1930, a baby girl drew her first breath on the other side of North America, on her way to maturation as union leader and activist Dolores Huerta; one year more, in 1931, lionized poet and artist Kahlil Gibran drew his final breath; three years still closer to now, in 1934, a baby boy was born who would grow up as noted journalist and documentarian David Halberstam; seventy-six years ago, a male child shouted out for the first time on his path to life as the gadfly and live wire writer Paul Theroux; a dozen years after that conjunction, in 1953, the first 3-D movie, “House of Wax,” came into the marketplace; a year subsequently, in 1954, the originator of motion pictures, and a producer and a director in his own right, Auguste Lumiere, spent his last day alive; another year nearer now, in 1955, fellow Frenchman, thinker and philosopher Pierre Teilhard de Chardin died; eight years closer to now, in 1963, the USS Thresher, an atomic submarine, met its end in the bottom of the Atlantic; fifty years back, the voice of a baby boy first sounded out on his way to songs of justice and freedom under the name David Rovics; five years thereafter, in 1972, more than seventy nations signed the Biological Weapons Convention, the first attempt in International Law to eliminate germ warfare and related technologies of death; three years further down the road, in 1975, renowned photographer and documentarian Walker Evans drew his last breath. From Wikipedia Day in History