http://21stcenturywire.com/2017/03/08/us-media-silence-as-pentagon-deploys-rangers-armoured-regiment-on-the-ground-in-syria/
For all scrappy scribes and stalwart citizens, for whom awareness is akin to fine food and sweet water, a smattering of ‘foreign’ stories with which not all are familiar, to begin a briefing from the alternative mediation at 21st Century Wire, an article about the ‘deployment’ of U.S. ground troops in Syria without Syrian solicitation or permission, an up to the minute contextualization of that imperial geopolitical cauldron and homeland to a ethnically, culturally, and religiously diverse socially democratic state that America’s ‘leaders’ have been seeking to destroy, an unfortunately perfect match for a new take, from the Russophiles at The Duran who report assiduously on things of extra concern to the Russian Federation, on the three-year-old nightmare that Yanks instigated in Ukraine, in particular dealing  with the more than paltry use by Kiev’s American puppets of the BUK anti-aircraft weapons that quite likely destroyed an Indonesian airliner and snuffed out almost three hundred lives going on three years ago, both of which then complement a recent portal from Fortuna’s Corner that as usual presents U.S perspectives without any recognition of contextual elements that might lead to different conclusions, in particular a file that purveys the view that cooperation with Russia or Iran cannot serve gringo ‘interests’ because Bashar Assad is a ‘puppet’ of Russia and Iran, as well as a download that contends that ‘relying’ on Kurds in the region, and, presumably, as in the past screwing them over whenever convenient, is a bad idea; the sum total of which material from Eastern Europe and Western Asia melds in interesting fashion with ongoing assessments, such as an item , of the governance snafus that are transpiring in ‘the good Korea,’ with the impeachment of the so-called ‘Conservative’ Prime Minister there, a second female leader to face expulsion in a key world arena in the past period of time.

Tongue in cheek, today, as 3.14, is Pi Day, and more prosaically marks Maths Day while in Korea and Japan men complement the gifts that they receive from women on Valentine’s Day with White Day, which is the chance for men to gift women; in the parlors of Roman conspirators two thousand sixty-one  years ago, Casca and Cassius finalized their plans to spare Mark Antony while they murdered Julius Caesar; one thousand five hundred thirty-three years subsequent to that, in 1489, a Cypriot queen sold her realm to the Venetians; a century and three years  beyond that juncture, in 1592, the correspondence between a ‘Julian’ date and the  numerals of pi was greater than at any other time; two hundred thirty-seven years in advance of today, opportunistic Spanish imperial forces removed the final British threat to Spain’s holdings at the mouth of the Mississippi river when they successfully attacked Fort Charlotte in Mobile; MORE HERE

Of all human behavioral proclivities, from the routine to the quirky, quite likely none of them incorporate the healing potential and liberating energy that female desire holds in its very presence in the social sphere, a paradox indeed inasmuch as the very male concept of dominating ownership either circumscribes for a particular man’s most manly control, or rejects completely women’s capacity to experience lusty abandon and orgiastic release: because the engagement of this energetic frenzy will ever remain—despite the black magic of antidepressants and other means of diminishing arousal—a key aspect of mentally and physically health life, for both women and men, an understanding of, and therefore extensive discourse about, this phenomenon must equally so become a central concern of Homo Sapiens who hope to achieve a consciousness that supports their own, and their entire social order’s, thriving or even surviving, a conclusion ironic beyond measure given that the rise of fascistic repression of women’s sexuality and reproductive rights has become just about universal among the ruling classes of the current context.

Numero Uno—“This pamphlet first appeared in the form of a series of leading articles in the Neue Rheinische Zeitung, beginning on April 4th, 1849.  The text is made up of from lectures delivered by Marx before the German Workingmen’s Club of Brussels in 1847.  The series was never completed.  The promise ‘to be continued,’ at the end of the editorial in Number 269 of the newspaper, remained unfulfilled in consequence of the precipitous events of that time: the invasion of Hungary by the Russians [Tsarist troops invaded Hungary in 1849 to keep the Austrian Hapsburg dynasty in power], and the uprisings in Dresden, Iserlohn, Elberfeld, the Palatinate, and in Baden [Spontaneous uprisings in Germany in May-July 1849, supporting the Imperial Constitution which were crushed in mid-July], which led to the suppression of the paper on May 19th, 1849.  And among the papers left by Marx no manuscript of any continuation of these articles has been found. MORE HERE

STUDYING MARX & POLITICAL ECONOMY WORLDWIDE, & MORE
https://www.youtube.com/watch?v=Gn6DDeqc-Fs
From a Rosa Luxemburg YouTube portal, an hour-long presentation by the Chilean-Cuban radical social scientist Marta Honeker, who fled her native land after U.S. financed and directed fascists murdered an elected president and started a reign of terror against popular leaders such as she was, as a freshly-minted Ph.d with a commitment to both knowledge and social justice, in this case noting the whys hows of the continued relevance of Marx’s work, an ideal match with the more au courant and extremely anti-establishment political economy of Mark Blythe, whose interview  with Mint Press News, includes a video that deconstructs the inequitable and ultimaterly self-destructive “class politics” of so-called austerity, in reality a scheme to force the poorest in the land to pay twice for the fiscal implosion that Capital induced through its routine operation, a packed six minute interlude that also appears  on YouTube with multiple chances to delve the “bull****” of the new, fake ‘thrift’-economies more deeply, both of which chances to read and watch and listen provide a dandy backdrop for a much more technical presentation by Lance Price a biologist and speaker whose specialty is understanding the science and political economy of what mediated outlets often call ‘superbugs,’ bacteria that resist all traditional antibiotics and can, therefore, induce much more frequent lethal infections, a result that is inescapable in the context of both profit-maximizing animal husbandry and ‘growth’-oriented pharmaceutical sales. 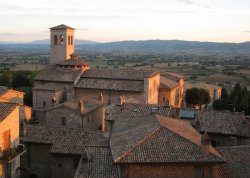 The 35th annual Art Workshop International was held from July 15 to August 4 at the Giotto Hotel in Assisi, Italy. The conference offered workshops in poetry, fiction, and creative nonfiction, as well as individual consultations with faculty.

Tempest-tossed flash pieces of under 750 words sought by Lumina for their Flash Prose Contest.

A World Socialism Web Site posting by an interesting and insightful writer who analyses the idea of the effort to restrict art and literature according to the dictates of racial and gender politics: “Ownership, property, is a relation among people—the right to use something, and to deny others the right to use it. In a period in which reactionaries are more and more placing property rights above human rights, and in which it is becoming more and more clear that the only way to secure human rights brings us into conflict with property rights, you want to extend property rights? To art? To the subject matter of art? Is there any possible way in which this can be considered progressive?”

A Nieman post that gives insights into the ways that language can be molded in order to effect a political result: “We seem to have two recurring motifs going on this week on Storyboard — animals and the politicization of language. On the animal front, we have Christopher Solomon’s “cute even when it’s dead” otter, and a mouse climbing a wall in a “One Great Sentence” that’s Lewis Carroll meets Graham Greene. On the politicization front, we have the release of Oscar López Rivera — freedom fighter or terrorist? — and the “carnage” that is the shooting epidemic in Chicago.”

A 21st Century Wire post that looks at the ongoing Mockingbird dynamics operational today: “Over the past month, more than 12 million declassified documents from the CIA have been reportedly published online. While the intelligence docu-dump supposedly sheds additional light on covert war programs, psychic research and the Cold War era, it also contains more evidence confirming the symbiotic relationship between the CIA and American media. “

A promising post from Truth-Out that demonstrates that citizens will not give up their reproductive rights lying down: “Gloria Totten, founder and president of the Public Leadership Institute (PLI) — a nonprofit, nonpartisan policy and leadership center that crafts progressive model legislation — told Truthout that despite the air of pessimism following the election, now is the time to push proactive measures. She and the other advocates and legislators who spoke with Truthout aren’t letting conservative control of 69 of the 99 state legislative bodies stop them from working toward reproductive health equity.”

An Aeon look at what truly can provide purpose, meaning, and happiness in life: “Parents often say: ‘I just want my children to be happy.’ It is unusual to hear: ‘I just want my children’s lives to be meaningful,’ yet that’s what most of us seem to want for ourselves. We fear meaninglessness. We fret about the ‘nihilism’ of this or that aspect of our culture. When we lose a sense of meaning, we get depressed. What is this thing we call meaning, and why might we need it so badly?”