Thought of the Day

To the apt question, “What exactly do we owe each other?” arguably only one response adequately conveys this debt, to wit everything, the recognition of which then invites a more or less in-depth pondering of how, precisely, one might discharge this obligation, a charge that manifests as a totality of interconnection and mutual reliance: a ‘minimum program’ in this regard might begin with, and certainly could include, between waking and falling again into dreams, each scrappy scribe’s and stalwart citizen’s commitment to sharing, as honestly as possible, some basic attempt to articulate at least a single clearly formulated idea that suits the circumstances and requisites of a particular daily passage, in the event a ‘Thought for the Day’ that might incite debate or ignite insight about the wonders and woes, problems and prospects, that characterize the present pass in ways that flow from history and yet represent ultimately a hinge between the past and the future upon which our consciousness and our moral mastery swing, like a door that has the necessary moorings to open and close whatever the winds of fate and the tempests of time.

Thirteen hundred ninety-three years ago, Muhammad’s troops won a key battle at Badr that marked a turning point in favor of the predominance of Islam in Arabia and adjacent lands; four hundred twenty-six years back, in Mali, Moroccan troops took a critical step in their conquest of Mali with the routing of a vastly larger Songhai Imperial army at Tondibi; across the Atlantic to the Northwest, two years shy of a half century later, in 1639, John Harvard’s name provided the basis for the name of what was to become one of the world’s premier universities; three hundred twenty years before the here-and-now, Spanish imperial soldiers captured the Itza Mayan capitol city in Guatemala, eliminating most resistance to Spain’s imprimatur in Central America; MORE HERE

For poetry there exists neither large countries nor small. Its domain is in the heart of all men.

After the movement for woman suffrage, which commenced about the middle of the nineteenth century, had continued for twenty-five years, the feeling became strongly impressed upon its active promoters, Miss Susan B. Anthony and Mrs. Elizabeth Cady Stanton, that the records connected with it should be secured to posterity.  With Miss Anthony, indeed, the idea had been ever present, and from the beginning she had carefully preserved as far as possible the letters, speeches and newspaper clippings, accounts of conventions and legislative and congressional reports.  By 1876 they were convinced through various circumstances that the time had come for writing the history.  So little did they foresee the magnitude which this labor would assume that they made a mutual agreement to accept no engagements for four months, expecting to finish it within that time, as they contemplated nothing more than a small volume, probably a pamphlet of a few hundred pages.  Miss Anthony packed in trunks and boxes the accumulations of the years and shipped them to Mrs. Stanton’s home in Tenafly, N. J., where the two women went cheerfully to work. MORE HERE 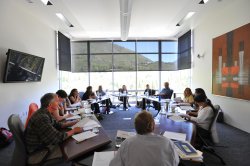 The 41st annual Aspen Summer Words Writing Conference and Literary Festival will be held from June 18 to June 23 at the Gant Hotel in Aspen, Colorado. The conference features workshops, panels, readings, and a readers retreat,…

A Consortium News article by a valiant truthseeker: “WikiLeaks’ new dump of CIA documents reveals that when it comes to undermining the Constitution and democracy, U.S. intelligence agencies and their political “overseers” are doing the jump quite nicely, thanks, says Norman Solomon.”

A Brain Pickings post that explains to us, through the words of a particularly wise artist of the past, what is it that drives artists, writers, and creators of all stripes: “The questions of why we humans create — why we paint caves and canvases, why we write novels and symphonies, why we make art at all — is so perennial that it might indeed fall within the scope of what Hannah Arendt considered the “unanswerable questions” central to the human experience. And yet some memorable answers have been given — answers like Pablo Neruda’s stirring childhood allegory of the hand through the fence.”

A Portside article that looks at current labor actions in a Mississippi plant: “Now Nissan workers are experiencing the brunt of those intimidation tactics, the Mississippi Alliance organizing this week’s demonstration at Canton claims. Its website is filled with examples of unfair treatment. Signs at a recent protest organized by the UAW proclaimed, “Labor rights are civil rights.”

A Washington Post look at one of the symptoms of the current era’s malaise, in regards to sex and interpersonal relationships: “It used to be that along with certain tax benefits, one advantage to being married was having more sex than singletons.

That benefit is steadily diminishing, according to a study released Tuesday. Overall, American adults are having less sex than they did a quarter century ago, with married people showing the most dramatic decline of all.”